For well over a century, Southwestern Law School has had a proud tradition of preparing students with diverse backgrounds to earn positions of responsibility and trust within the legal profession and the community. As early as 1915, Southwestern law degrees were being earned by such students as Betty Trier Berry, who became the first woman to work as a public defender in the United States, and B. Rey Schauer, who would eventually serve on the California Supreme Court. The long list of distinguished Southwestern alumni in positions of leadership in Southern California and beyond includes many elected officials, top prosecutors, defense attorneys, judges and corporate leaders.

But one individual who epitomized that tradition perhaps more than any other Southwestern alumnus is Tom Bradley, ’56. Devoted to public service throughout his life, he is a major historic figure in the development of the city of Los Angeles, who served his community for nearly six decades as a police officer, councilman and five-term mayor.

According to the Los Angeles Times, “Bradley spent a lifetime bridging racial barriers and used his skills to forge extraordinary coalitions, most notably between blacks and Jews and between labor and business. He presided over a period of enormous growth in Los Angeles, leaving the gleaming downtown skyline of Bunker Hill and the start of a subway and light-rail system as the most tangible of his legacies.

“Bradley also was key to the racial peace that the rapidly diversifying city enjoyed during most of his five-term hold on the mayor's office. He opened doors for minorities and women to serve on city commissions, to rise in the ranks of City Hall employees and to share in city contracts.”

Tom Bradley was born in Calvert, Texas in 1917, the son of sharecroppers and the grandson of a former slave. His family moved to California when he was seven. A product of the Los Angeles public school system, his high school academic and athletic abilities enabled him to pursue a higher education with distinction.

An All-City football player and a Southern California 440-yard dash champion, Bradley attended the University of California at Los Angeles on an academic scholarship where he went on to distinguish himself as a track star. Among his classmates were Jackie Robinson, Kenny Washington, Woody Strode and Dr. Ralph Bunche.

Prompted by a strong desire to serve the community, Bradley joined the Los Angeles Police Department in 1940. Shortly thereafter, he married Ethel Arnold, and the couple had two daughters, Lorraine and Phyllis.

Preparing for a Career in Law and Public Service

In 1952, Bradley enrolled in Southwestern Law School’s evening program while continuing to work full time as a police officer. Four years later, he graduated from Southwestern and passed the California Bar Exam. He retired from the Los Angeles Police Department in 1961, after more than two decades of service, with the rank of Lieutenant, the highest rank for an African American that was permitted during his career.

Following a few years in private law practice, and with the encouragement of a group of community leaders, Bradley entered the political arena, winning a Los Angeles City Council seat in 1963 by a two-thirds margin. He served on the City Council for 10 years before his election as mayor in 1973. He was reelected by large margins for four additional mayoral terms.

“It’s been a long way for Tom Bradley,” the newly elected mayor told the inauguration crowd on July 1, 1973. Tom Bradley made history, as he had several times before, by becoming the first African American mayor of the City of Los Angeles, the second largest city in the nation.

During his unprecedented five terms as Mayor of Los Angeles, the city transformed into a world center of unparalleled ethnic and cultural diversity. His legacy includes the expansion of some of the city’s most important economic strongholds, including the Los Angeles International Airport and the Los Angeles Harbor, as well as the advent of much-needed mass transit.

Under Mayor Bradley’s leadership, a new downtown skyline became a reality, a path-breaking Air Quality Plan was implemented, and one of the nation’s most ambitious urban recycling programs was launched. Bradley spearheaded the effort to bring the 1984 Olympic Games to Los Angeles, realizing the most successful Olympiad in the modern history of the competition, and bringing both prestige and $3 billion of economic activity to the city. He brought community resources, both human and financial, to over 400 elementary schools through L.A.’s BEST, providing after-school computer training, tutorial assistance and other enrichment activities to the next generation of Angelenos. And through many public-private partnerships, he urged and realized the accomplishments of other essential city-wide goals.

Throughout his career, Mayor Bradley was always committed to and involved in the growth and development of Southwestern as well. Whether as a commencement speaker; as chair of scholarship, professorship or annual fund campaigns; welcoming new students; serving as a special guest at any number of events; serving on the Board of Trustees; or providing guidance in the law school’s acquisition of the Bullocks Wilshire landmark, he remained a key figure at Southwestern. In light of his contributions, Bradley was named “Alumnus of the Year” by the Southwestern Alumni Association in 1979 and the following year received an honorary Doctor of Laws degree from the law school. In 1993, the Southwestern Alumni Association recognized Mayor Bradley’s accomplishments and contributions to the City of Los Angeles and Southwestern with the first “Lifetime Achievement Award.”

Mayor Bradley’s commitment to peace, justice and opportunity was steadfast throughout the years of Los Angeles’ growth, change and challenges, during his tenure as mayor, as city councilman, and as a Los Angeles police officer. His years in office serve as a hallmark of public service and exemplify the values Southwestern Law School strives to promote in its students. Mayor Bradley’s lifetime of achievement and his motivation and support of others provides the highest role model for current and future generations of legal professionals and public servants. 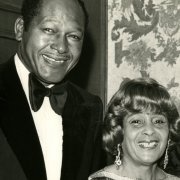 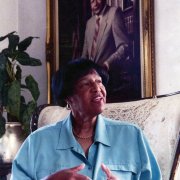 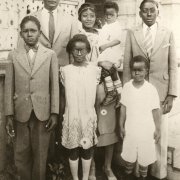 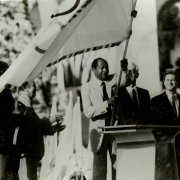 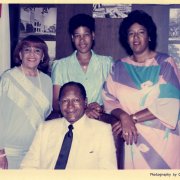 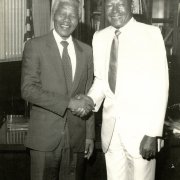 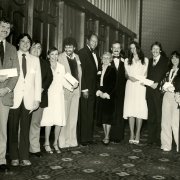 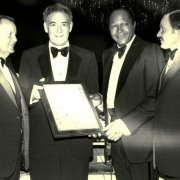 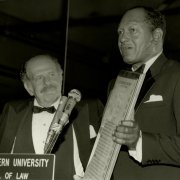 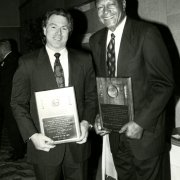 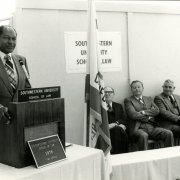 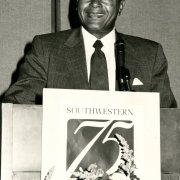 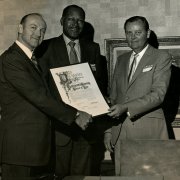 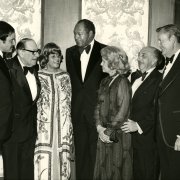 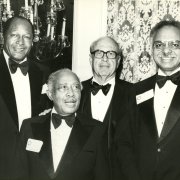