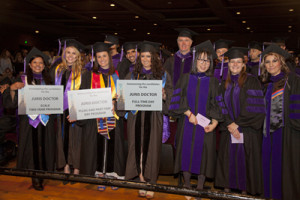 Members of the Class of 2016 and their families, friends and faculty gathered at the Shrine Auditorium on May 15 for Southwestern’s 101st Commencement Ceremony. The Honorable Ming W. Chin, Associate Justice of the California Supreme Court, served as the keynote speaker, and degrees were conferred upon 326 Juris Doctor (J.D.) and 36 Master of Laws (LL.M.) candidates.

In her opening remarks, Dean Susan Prager recalled the rich history of the law school that was established in 1911, and the many trailblazer alumni, beginning with the very first graduate, Betty Trier Berry, who became the first female public defender in the country. Addressing the newest class of Southwestern graduates, Dean Prager said, “I see in my short time at Southwestern a dominant culture of work and dedication…. Many of you juggle multiple roles: you are parents, you care for another family member, you have jobs, and you make commitments to one another…. And, in the process of juggling all this, you learn to manage your time and you are exceptionally efficient. In fact, I am in awe of you.” She also referred to the inspiring “culture of support” within the law school and between students and alumni that is another hallmark of Southwestern.

Amanda Brooksbank, a member of the SCALE class, performedthe national anthem. The student commencement speaker, Damaris Santamaria, also a member of the SCALE class, spoke of the flexibility and determination of the graduating class and how their time in law school shaped their ability to enter the legal profession. “These experiences are a testament to our strengthening intelligence and endurance, but most importantly, they’ve allowed us to reach today’s milestone in the journey of improvisation; one that empowers us with the ability to guide others,” Santamaria said. “Because lawyers aren’t just fancy suits—they’re counselors, advocates, educators, hand-holders, fire extinguishers, mentors and confidants. And with each case, client and issue, the ability to improvise, adapt and grow will be the difference between success and failure.”

In his keynote address, Justice Chin, the first Chinese American to serve on the State Supreme Court, also remarked on some of Southwestern’s most prominent alumni, including his colleague on the bench, the late Justice Stanley Mosk ’35, the longest serving California Supreme Court justice. Justice Chin reminded the graduates that “none of us gets to where we are without the support of others,” and shared the story of his own family’s humble beginnings as Chinese immigrants to the United States and how his parents worked to nurture and educate their eight children, teaching them by example. “As new graduates of this outstanding institution, the world is at your feet,” he said. “It matters not where you began or where your family began; it matters what you do with the gifts that you have been given by this outstanding institution.”

Justice Chin also spoke of the importance of a strong judiciary and advised, “As you move forward in your legal careers, let us together ensure that our judicial system continues to be fair, impartial and independent. If we do that, then our democracy will remain strong and endure and will keep the American dream alive for all of us.”

At the ceremony, Professor Norman M. Garland, a highly respected teacher, scholar and lawyer who has been a member of the law school’s faculty since 1975, was awarded an Honorary Doctor of Laws degree. “Southwestern has been a melting pot for a diverse and notable student body, many of whom have gone on to very successful careers both in the law and out,” he said. “Nothing compares with the pleasure I have gotten out of teaching, getting to know many students, following their careers, and becoming friends with many Southwestern alums. I cannot imagine any other career I might have had that would give me, or anyone, such an enjoyable and worthwhile life.”

elected by the senior class as co-Grand Marshals, and presented the graduates during the conferring of degrees.

The 101st Commencement highlights video and photo albums from the ceremony and Graduate Family Reception are available online.